After much anticipation, Denver International Airport's new rail link to the city centre has opened for service. 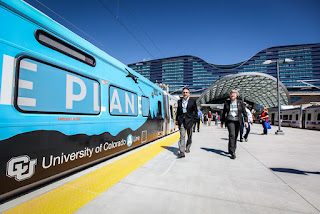 Operating between a station at the south end of the airport terminal (below the brand new Westin Hotel, via the longest escalator ride in the state) to Union Station in central Denver, the sleek electric train ride takes 37 minutes to cover the 37 kilometre distance.

Onboard, passengers can charge their electronic devices while relaxing during the ride. Trains will run between 4:00am and 1:30am, with service every 15 minutes, and stops at 8 stations. Cars have ample room for luggage.

The adult fare is USD 9. No word yet on discounts for airport staff and commuters.

The Denver Airport train is part of the Denver metro system's Line A (officially, the "University of Colorado A Line").

What I learned from my taxi driver

We love a good story. Especially a good taxi story. Building on our recent Famous fares: Nimoy drives JFK post, here are a few stories of everyday people and lessons learned from inside a taxi.

The Case of the Israeli Taxi Driver - Joel M. Hoffman

"I'll tell you what,” I said to the taxi driver in Haifa who was trying to cheat me. “It’s Shabbat. Whatever price you tell me — that’s what I’ll pay.” It was Friday night, and I was on my way to services at Leo Baeck. As a graduate student at the Technion, I hadn’t yet purchased a car, so I had to rely on public transportation — busses, usually, but taxis Friday evenings and on other occasions when I wanted to treat myself... [read about Joel's experience].

Istanbul is a crazy place. Officially this city takes care of 15 Million people, but insiders and locals say this figure easily adds up to 21-22 million if you consider all legally and illegally present inhabitants. If you have never been there you still should be able to imagine the traffic situation. Roughly 12.000 taxis (or as Turkish language says: Taksi) in narrow, hilly, uncoordinated streets blowing their horn for different reasons: warning, information, respect or simply to reach out to an attractive lady walking by. In between fast scooter drivers and now & then luxury Bentleys making their way through the crowded streets... [read Ralf's lessons].

How one Boston taxi driver changed my talk - Collaborative Gain

Yesterday, I had a great and humbling conversation with my taxi driver on my way to my last “Customers Included” book talk of the week in Boston – and it changed what I had to say when I got on stage. Stuart – my driver – was very friendly from the start.... After we put my bags in the trunk and Stuart started us on the trek, I asked him how long he’d been driving. He said he liked his job and had been with this taxi company about a year. When i asked what he did before this taxi company, he started – tentatively at first – to share his life story... [read the lesson].


Related resources
Three Lessons I Learned from a Taxi Driver on How to Get Clients - Nathalie Lussier
Famous fare: Nimoy drives JFK
Dealing with taxi drivers
Do we really hate taxis?
The 420 from PDX

Posted by IHateTaxis at 12:30 0 comments

Have a layover coming up in Almaty, Kazakhstan? Wondering what you might be able to do with your time?

Here's a little inspiration. We've gathered the following stories from those who have experienced a layover in Almaty. Learn what they did, if it was worth it, and their tips... [read more].

Moscow has HOW many airports?!?

Moscow has 3 major airports.We recently found a great Russian blogpost that describes the relationship between the 3, and the challenges of moving between them:


"Moscow has many airports. How many? No one really knows... One time I had a stingy thrifty Dutch friend write me and say that he was flying into Domodedovo (domestic flight) and would then have a departure from Sheremyetovo (International) only 4 hours later. This was to happen during the day. And when I inquired as to his logic, he answered that doing it this way would save him TEN EUROS. Also, he was asking me to pick him up..." [read the rest of this priceless story in Moscow Transfer Travel Travail].

If you enjoy Andy's writing as much as we do, you can follow him on Twitter as @andyfrecka.

But, please, don't call him for a ride.

Related resources
An Aeroflot Nightmare: How I Got Placed Under Virtual Arrest in Moscow
Airport nightmare: Russians seize concertmaster’s violin
Hundreds Miss Sheremetyevo Flights Because of Road Work
STUCK: The meaning of the city’s traffic nightmare - New Yorker
Getting around Moscow by metro and public transport

Posted by IHateTaxis at 12:38 0 comments

Have a layover coming up in Philadelphia? Wondering what you could do with your time?

Here's a little inspiration. We've gathered the following stories from those who have experienced a layover in Philly. Learn what they did, if it was worth it, and their tips... [read more].

Posted by IHateTaxis at 22:00 0 comments

Meet Piper the Airport K9. The 8-year-old border collie has worked at Traverse City Cherry Capital Airport (TVC) since 2014. A wildlife control "airport K9", Piper's job is to scare birds away from the runway.

Piper became famous this week when he won this year's Shutter Shootout Photography Contest from the U.S. Coast Guard. Read the full story here, including how you can follow Piper in social media.

Posted by IHateTaxis at 06:58 0 comments

Why we shelved Uber updates

As there are a lot of Uber stories in the news each month, so about 6 months ago we gave up trying to stay on top of developments (not really our focus anyways), and switched to a monthly summary of the previous month's most notable news, posted on the 1st or 2nd of the month.

About a week ago, I began building the Uber news recap - March 2016, collecting stories, buiding links, and so on.

In the process, I was intrigued to learn the news about Uber's challenge to hackers, offering rich rewards to find bugs and issues in their software. Brilliant, I thought.

As I was gathering links on the best coverage of the initiative, I was dumbfounded to learn that Uber had backtracked, rolling back the amount of the rewards. Whaaatt?!? This was after the programming community had already started to work on the issues, racing each other to compete for the prize(s). Really, Uber? Are you really that stupid? Even I, a relatively non-techie observer on the sidelines was able to put 2 and 2 together: if you are a technology company, who are the last people you want to piss off? Hackers. And how could you make it worse? Draw your flaws to the attention of the hacker community, wave dollars in front of their eyes, then snap the purse shut. SNAP! I picture an alligator's jaws open wide, luring it's prey in, then snapping shut in a flash!

All this while Uber is bleeding millions (or is it billions?) in Asia, chasing a market that's so far eluding it. Maybe Uber's resources would be better spent getting its house in order, maybe it should have honoured its offer to the hackers (jeez, ya think?!?!?).

So, it was with amusement last week that I discovered that my March Uber news recap - once written, with links to stories all about the lure and the misstep - wouldn't save properly. I got an error message, and my post preview looked weird. When I looked at the HTML for the post, I could clearly see it had been hacked. Or maybe there was a virus on Blogger designed to attack posts about Uber, or maybe this story. Whatever it was, the code was a huge, unfixable mess, with links garbled wherever Uber was mentioned. "Ah, and so it begins," I thought.

Hacking a blog website to mess up stories is, I'm sure, child's play to a hacker. But it sure makes me wonder what will, or could, come next for Uber, as it has made itself so vulnerable to its newly created enemies.

Editor: In the end, we decided that our news recaps weren't adding much value, so just decided to drop them, and devote our blogspace to other things, but thought we'd share our thinking, our experince and predictions. And, we're posting this story, sans links, to hopefully be less likely to be hacked.