Good news for travellers to Indonesia!

The new express train will reduce the travel time between the two airports from 1 to 3 hours by taxi, to just 30 minutes. This will help facilitate the transfer of more domestic airlines from the over-capacity Soekarno-Hatta Airport to Halim Perdanakusuma Airport in East Jakarta. Construction on the Soekarno-Hatta Airport train terminal has commenced.

Several new train stations will be built to serve the Greater Jakarta area. According to Muhammad Fadhila, KAI Railink's president director, in the Jakarta Post, new station locations are planned in Batu Ceper, Tangerang, and adjacent to the existing Sudirman station in Jakarta city centre.

IHateTaxis has heard of completion dates in both 2016 and 2017, so we'll have to wait and see, but this new Jakarta airport train service will be welcome, whenever it arrives!

In the brave new taxi world of Uber, others are also creating innovations that link smart phone technology, the internet, and attempted cost savings to the consumer. For a few Canadian student inventors, their cabshare app (cabshareanada.ca, @cabsharecanada) is an attempt to link consumers into one taxi versus two by creating a social platform to connect passengers heading out in the same direction. And in theory, it makes total sense to cut down on fares but one wonders the actual practicality of it in real time. While it makes sense at an airport or train station to link up with another passenger to travel in the same direction, it is less likely to happen outside of major transportation nodes. And even if it does work, you would need to figure out who is paying what amount and by what means. It is highly improbable both random travelers are going to the exact address and, of course, whether or not a taxi driver will accept payments in half cash, half credit.

In other words, the bartering process could continue throughout your journey with both the other passenger and the driver. Also, all too often, taxi drivers are onto this perceived scheme and will attempt to double charge the fare and treat individuals seperately.

Also for those anti-social types, whom prefer to be using your smartphone for the whole ride to the airport or elsewhere you now are somewhat obligated to engage in idle chit chat with your new found friend. The same individual that may be creeping your Facebook profile later on and assuming a friendship exists because of awkward chat in a taxi?

All in all, is it really worth it? For some people, it will be, but for individuals like myself I would prefer avoiding the unnecessary complexities of a routine task of getting from A to B. The cost of privacy and a silent ride without potential haggling with the person next to you is worth the extra few dollars in my perspective. 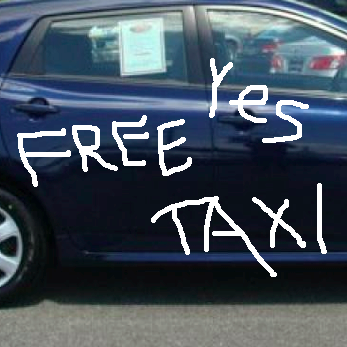 Posted by IHateTaxis at 07:35 0 comments

If you want to see the war on Uber in Canada, check out this recently compiled website that hopes to dispel the 'sensationalist' claims by Uber that it will offer consumers more affordable choices when it comes to ground transportation: http://taxitruths.ca/

A quick review of the website reveals an amateur approach to marketing, with disjointed arguments about the case against an alternative provider, mixed in with irrelevant facts about taxis in Canada.

You see, the taxi monopoly in Canada has never had to market their services to consumers per se, but rather spends their time working on politicians to limit new entries to market and increase fares. They have been waging a war on consumers for years to force you to pay more and wait more. If you can control the supply side of things, you can manipulate the demand favourably. This is one taxi truth they don't want you to know about, but rather are creating the Uber Boogie Man to scare off consumers to the notion of "choice" which would increase supply, draw down demand, and reduce overall costs for the traveler.

Under their page of "The Truth", the Canadian Taxi Monopoly indirectly paints future Uber drivers as insecure and the service of limited value. In other words, you will be uninsured and be driven by some amateur driver versus a seasoned, professional taxi operator. That somehow driving a motor vehicle is a specialized skill set now that should disqualify people like you and I from entry into this exclusive market. And despite Uber's legitimate claim of insurance coverage exceeding that of the taxi industry, the Canadian Taxi Monopoly continues to spread untruths about coverage because ultimately their arguments are that weak.

Furthermore, as a final desperate plea for you to discard new entrants into the marketplace, the Canadian Taxi Monopoly is appealing to the consumers' moral compass to suddenly link Uber's entry as negative in the form of job losses and earning a decent wage. In other words, we are being told monopolies are good because they artificially keep some people in business.

The most hilarious part of this whole debacle is that somehow the Canadian Taxi Monopoly think that consumers will actually go to this website and become ardent supporters of theirs in this "selfless campaign". For too long the Canadian Taxi Monopoly has disregarded the consumer when it comes to professionalism, not hiring fluent and polite drivers and essentially cutting costs while lobbying for rising prices. Now they want us to get "educated" so that we can have more of the same!


Related resources
New website features 'Taxi Truths' and takes aim at Uber
UberX: Innovation or Anarchy? A Look at the Pros and Cons of Montreal’s New Ridesharing App
Stop Those Who Would Stop Uber
Taxi Truths campaign puts lipstick on a pig
Canadian Taxi Monopoly is attempting to curb consumer choice
Uber provides the taxi industry a good kick in the pants
Posted by IHateTaxis at 06:17 0 comments

In the latest move of desperation, Canada's biggest taxi companies have banded together to launch national advertising and a new website.

They're calling it a conversation with Canadians, but it's a one-way campaign built on fear mongering anti-Uber campaigns to date in Calgary, Edmonton, Montreal, Ottawa, Toronto and Vancouver.

The new website, Taxi Truths, touts the benefits of taking a licensed taxi, With a groovy website design (it's actually rather clever), and even implying it has own app, Taxi Truths is trying to show it is "with it", but it's clearly lipstick on a pig.

Armed with data and arguments on the side of safety, security and accessibility (the claim on value will be disputed), the Canadian Taxicab Operators fail to grasp the role sharing has on the psyche of Canadians on the move, in the time of the exploding sharing economy.

Will it work? Only time will tell, but we are clearly in the side if the skeptics.

Desperate last straw efforts to save an archaic monopoly will be hitting Canadian airwaves in the coming days as the Canadian Taxicab Association (@CTA_Taxi) tries to argue that taking an “unregulated vehicle” is the same thing as having some stranger with no flying experience operate your flight.

Yes, this is how silly it is getting to try to convince consumers to stay with a system that profits handsomely by ensuring an undersupply of taxis and causing endless frustrations in commuters. The idea of introducing more drivers on the road whom will charge less money than the traditional monopolistic rates has this industry running scared that competition will mean less fares and more accountability to customer service.

In Uber’s defense, they do background checks on the drivers and look after insurance. Whether a taxi driver is better than a regular driver is highly subjective however.

To compare driving a motor vehicle to that of flying a sophiscated flying machine is just plain silly and is insulting to commuters that want to reduce their waiting time and the ensuing bill for their commute.

In Vancouver, a 6 month moratorium was placed on the issuance of more taxi licenses which thereby prohibits Uber from entering the market.

In addition, Vancouver cab companies have gone as far as to launch a lawsuit against Uber, even before they have actually started business in the city. Politicians have thus far weighed in on the side of the traditional taxi operators, but there is little doubt that the free market and providing consumers with greater choice will sweep over the old age era of convenient protectionism for those maintaining an arguably corrupt fiefdom that deliberately limits competition despite overwhelming evidence of increasing demand.

As a mechanism to bolster growing support in Vancouver, Uber launched a job fair for new drivers and has created an online petition (over 6,000 signatures to date) to be circulated to the City of Vancouver requesting entrance to address an arguably growing business need.

For the taxi monopoly, the age old tricks of lawsuits and intimidation will eventually backfire so its high time they accept Uber as a legitimate competitor and begin to enhance customer service and reduce fares if they wish to stay in business over the long term.