Have a layover coming up in Hong Kong? Wondering what you could do with your time? Here's a little inspiration.

Have a layover coming up in Munich? Wondering what you could do with your time? Here's a little inspiration.

Help! I left my iPad on the plane!

Ever forgot your phone, iPad, iPod, book or glasses on an airplane before? Maybe you left it in the seat pocket, in the overhead compartment or simply on the seat.

Well unless you remember this shortly after you disembark from your plane and can chase down an agent, be prepared to delve into the frustrating depths of hell trying to get it back.

I left my iPad in the seat pocket on a flight from Heathrow to Edmonton. Admittedly, it was my own fault. I personally blame my own sleep deprivation after a 28 hour trip for such carelessness.

Once I got home, I quickly called Air Canada’s lost baggage department and quickly got a claim number from an Air Canada Agent in an overseas office. I was told in broken English that a system was in place to track down my lost item and once the airline cleaners found it it would be logged in the system, flown to Vancouver and that I would have 5 days to retrieve it before it is sent to the central lost and found in Montreal. Admittedly, it did cross my mind numerous times that the cleaners or another passenger could have swiped the device and have it reformatted but I had faith in humanity and Air Canada!

Over the course of 4 days I called the number I was given 12 times and to no avail they had no update and seem less inclined to go that extra mile and call the Air Canada Edmonton office to check with them on the recovery of any lost iPad.

I decided to then call the Edmonton Airport and request their assistance. It was made clear to me that there is a difference between Lost and Found at the Airport and Lost and Found with Air Canada. They were kind enough to forward me to one lady that works at Air Canada whom was able to track down my iPad at Heathrow!

Yes that’s right, my iPad flew from Heathrow to Edmonton and return without being noticed by the cleaners or the next passenger sitting in my seat.

Somewhere out there, my iPad is sitting on a shelf somewhere in an arena of corporate indifference to my plight to have back a device that contained many of my life’s contents. :(

Here are some tips if you are ever in the same situation as me:

We are now blogging about the Amazing Race Canada

We've gotten creative, and are now blogging information on how to go where the teams went, and how to do what they did - in addition to information on the airports visited (Calgary, Victoria). Read more on our Week 1 blogpost...
Posted by IHateTaxis at 04:48 0 comments

With Season 2 almost upon us, we thought we would recap the airports that the Amazing Race Canada teams visited in Season 1. 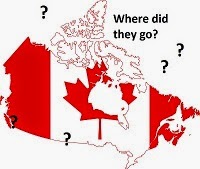 We're having some fun over on our IHateTaxis Amazing Race Canada Blog.

We created a quiz about all the airports that the Amazing Race Canada teams visited in Season 1.

If you are a fan, or an #avgeek or just love airports, then check it out.

Posted by IHateTaxis at 00:34 0 comments

Our Amazing Race Canada Blog is back!

The 2nd season of The Amazing Race Canada is back, with action kicking off on July 8th.

So, we are happy to announce that our IHateTaxis Amazing Race Blog is back! Our first blog post of the season was just posted: Amazing Race Canada Season 2 - starts July 8th!

As there are so many great blogs sharing news about The Amazing Race Canada teams, we take a different approach: our blog posts are about the destinations the teams visit, the airports and transportation in particular. Be sure to follow along to learn about the airports that the teams will visit along the way - great information if you think, "Hey, I want to go there!".

Don't feel like parking your car at the airport? Are you willing to do anything to avoid driving around trying to find a spot? Running late for your flight, and just want to leave your car and run?

If you live in Düsseldorf, Germany, then you are in luck. If not, read on and be jealous.

As in, Ray the Robot Parking Valet.

All you need to do is swing your car into one of Ray's designated spots at Düsseldorf Airport (DUS), use the smartphone app to let Ray know (and confirm the car is empty), and walk away. Ray will do the rest.

"Ray" is essentially a high-tech forklift slash valet hybrid, that moves cars from the designated drop-off spots to his own separate parking area. It's more sleek than it sounds, and cars are treated with remarkable care.

Systems are even integrated to the point that Ray will check the status of your return flight, to have your car ready for you when you collect your luggage. Travelers pay a premium for the parking service, but so far the interest is high. Who knows, maybe one of Ray's cloned brothers will take up residence in an airport near you.

Why they named him Ray, we don't know... but admit that "Ray the Valet" has a nice ring to it.