Posted by IHateTaxis at 12:37 0 comments 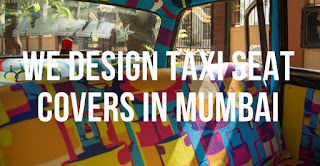 There was a story in the Daily Mail on February 16th that caught our eye. It would be hard not too.

Be warned, if you read this piece, you'll be adding Mumbai to your bucketlist and planning a trip to take one of these cool rides...

Interesting story about artsy taxi interiors created by the Taxi Fabric, an art collective based in Mumbai.

Connecting young designers with drivers, the initiative has transformed 26 cabs so far.

To learn more about Taxi Fabric, visit their website.

Are you a designer? You can even apply to design a cab...

Posted by IHateTaxis at 12:36 0 comments

In Mashhad, a new metro link to the city's airport opened on February 6.

The 6 kilometre (4 mile) extension of Metro Line 1 runs southeast from Ghadir, and makes a stop at Parvaz, before continuing on to Mashhad Hashemi Nejad International (MHD) Airport. Mashhad's metro system opened in 2011 and operates at speeds of up to 80 km/h.

Meanwhile, construction is almost complete on the extension of Tehran's metro to Mehrabad Airport, the city's second busiest air hub. The new link is projected to open in March 2016.

Posted by IHateTaxis at 11:47 0 comments