The NYC Port Authority, the organization that operates New York City's area airports (and more), has a new blog: PORTFOLIO

You'll want to check it out if you are an aviation buff and have an interest in airport history. On Twitter, follow @PANYNJ for blog post alerts (follow @NY_NJairports for more time-sensitive airport updates).

Posted by IHateTaxis at 04:26 0 comments

Even taxi drivers are chill about Cairn's free airport bus

Cairns Airport has a new airport shuttle bus service - and it's FREE.

The new service, Airport Connect, provides a vital missing link between the city's public transportation system, and the Cairns International Airport, which has no public transit options. Passengers, airport staff and pedestrians who have no desire or budget to pay for a taxi or shuttle, or who are not staying at hotel with shuttle service, have had little choice but to walk.

Airport Connect will operate just once an hour, so it may not work for most passengers. But now, at least, they have a choice.

The motivation behind the move is sad, but also inspiring: 2 months ago a pedestrian died after being struck while walking along Airport Avenue. The new service means that Dinah Boughton's life was not in vain. 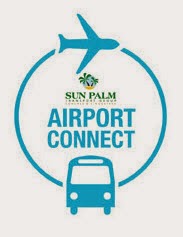 The Airport Connect service is not without its detractors, but we'll take a free bus service over no bus service at all. If the only thing better is a direct bus service from the city centre, well maybe that would be a good outcome. And if advocates for cycling and walking paths are heard, and additional facilities are created, then all the better.

The free bus experiment is limited to a 3-month trial period, which we think is a shame, as this isn't nearly enough time for visitors to learn about the service and begin to use it.

Nonetheless, it's a brilliant idea, and whoever seized the funding to get the project off the ground should be congratulated. Now it's up to both the public to show their support - by using the bus - and for airport executives to show their leadership - by standing their ground and extending the service. If government officials drop the ball by failing to permanently fund the initiative, then it really will be a shame.

Let’s face the obvious fact – you will die at some point. Now, getting over this depressed reality should not paralyze you from living life and seeing the world in real-time versus from in front of a television set.

It seems all too often that the world is becoming a small place to travel within when the broad strokes of generalization of ‘no-go zones’ are factored into trip planning. Generally speaking, the Middle East is considered very volatile with the usual images of suicidal bombers and revolution. Africa is considered dangerous for contacting deadly viral diseases to war and to horrific crimes against locals and tourists alike. Much of Asia, with the exception of the southeast portion, is considered to share the same traits as the Middle East and Africa.

Right off the bat, most people now eliminate 2/3rds of the world and stick to safe countries in safe regions to ensure a continuance of life as they know it. And with the overload of information in people’s lives, we thrive and make decisions based on a combination of news or research snippets followed by gut reasoning.

When Ebola hit the news, people were avoiding Africa and all parts of it, despite the fact it only impacted three countries in West Africa and left the remaining 51 countries alone. While images of the Middle East show chaotic conditions, much of the region is peaceful or safe to travel, or countries considered dangerous generally have pockets of it, versus a wide swath of territory (exception being ISIL in Iraq, Syria).

Unfortunately official country reports tend to reinforce these stereotypes and this compounds the issue further with insurance companies, travel companies and the likes also terminating or intensifying their view of the area.

I am not suggesting you shrug this information off completely but spend time doing research on where you want to travel and what areas to avoid.

Admittedly, I went to Yemen last year as a tourist, a country that only receives a handful of American tourists and likely even less Canadians. Despite the political issues, kidnappings etc., I was able to find pockets of the country that were very safe and was able to enjoy it without dealing with hordes of tourists.

Traveling solo or with a small group tends to attract less negative attention and spending money with a reputable tour group also greatly assists with navigating away from potential dangers.

Maybe the world is going to hell in a hand-basket, but most of the world is still relatively safe and if do your own detailed research, and do proper planning, you have the opportunity to see reality in your own eyes versus the often drummed up sensationalism of mass media.

Related resources
Fear, Risk and Travel - Gary Arndt, Everything Everywhere
Travel warnings and advisories - Independent Traveler
Why you should ignore travel warnings - Reid's Italy
Travel in the time of Ebola
May the odds be ever in your favour
What counts as a country visited?
Posted by IHateTaxis at 14:20 0 comments