Of course, just because an airport didn't make the list, doesn't mean it isn't dreadful. A lot depends on who responds to the survey and their experiences. And the current circumstances impacting resources. Of particular note this year:
The good news? In Layover Ideas for the World's Worst Airports (2016), our sister-site has suggestions about you to survive your layover if you find yourself headed to one of the dreaded, on either list! 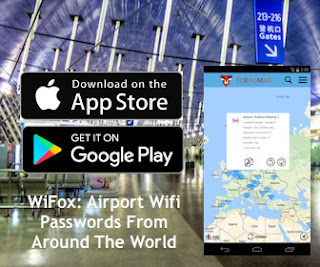 On the balance of things, last week was a pretty good week for travelers in search of airport connectivity.

On the downside, we are hearing reports of some airports cutting back on free WiFi. Whaaattt? It's apparently true, according to articles in both Travel+Leisure and Travel Weekly. Are they crazy? If airports haven't learnt anything about what passengers want, they are totally missing the point of the "passenger experience" (PaxEx) movement.

We can all thank Anil Polat, the techie, blogger and world traveller (aka Robin Hood hacker) who created the app.


A digital nomad who has been living on the road for the past 5 years, Anil has clearly thought of everything:

Giveaway: enter to win 1 of 20 promo codes for a free copy of the WiFox App (ends at midnight on October 16)!

Our suggestion for airport authorities who are worried about the annoying their rent-paying tenants who are offering WiFi access to their customers only - and wish to keep it that way:


Wake up and smell the virtual roses: implement, bring back or keep FREE AIRPORT WIFI for all airport visitors.

Here's that list, along with a bit more information on each, and a few other ideas while you are in the area... [continue reading on our Layover Ideas blog].

Posted by IHateTaxis at 03:03 0 comments

No, we are not referring to the above, but a new kind of "barnacle" that has been hitting the news this week in the world of parking enforcement. We'll let some media excerpts tell the story...

"Returning to your car to find a ticket tucked under the wiper sucks. So imagine how you’d feel finding a six square foot block of yellow plastic splayed across your windshield, rendering it impossible to see a thing." WIRED

"It's called The Barnacle. No, it's not the pesky sea creature you find stuck to the bottoms of boats. It's a contraption only humans could create. The Barnacle takes your standard, old parking ticket infraction to a whole new level." CBC Radio

"Using two industrial-grade suction cups, the Barnacle mounts to a car's windshield, which unlike a boot, allows the car to be towed. The Barnacle comes with a screen to let the parking offender know why it was installed, and a credit card reader, so they can pay to have it removed. If the offender tries to drive off, an alarm will sound." Road and Track

"Personally, I think The Barnacle is the perfect punishment for a parking criminal. It’s bright, yellow, and obnoxious. Everyone who passes by will know you've done wrong. Also, good luck getting it off or ignoring it!" Daily Buzz

Don't worry, there are no plans to deploy the devices at airports, and that's not really the target market.

At this point, the Barnacle is being piloted in two USA cities - Allentown, Pennsylvania, and Fort Lauderdale, Florida. Who knows if the parking officials in your city are paying attention...


Related stories on the Barnacle
This New Form of Parking Enforcement Sucks. Like, Actually Sucks - Wired
This Weird Windshield Blocker Could Replace the Parking Boot - Road and Track
New Barnacle “Parking Ticket” Covers Entire Windshield, Won’t Come Off - The Daily Buzz
Got a stack of tickets in your glovebox? You may find a Barnacle stuck to your car - Road Show by CNET
Forget the wheel clamp, security firm reveals stick on 'Barnacle' that blocks the entire windscreen - Daily Mail
The Barnacle: A new kind of parking ticket coming to a windshield near you? - CBC Radio (audio and video links)

The reasons weren't clear right away, leaving the residents of Wuhan, China to wonder why a rusting, derelict Boeing 737 appeared on a busy street in their city.

Among the rumours in the city of 11 million, capital of the Hubei Province in central China, were an open-to-the-public flight simulator, or a restaurant (what, no hotel or nightclub rumours?).

It turns out the restaurant rumour was true, and the grounded airliner has opened for business.


Guests 'board' the Lily Airways Restaurant via a gangway and are served by staff sporting airline-themed uniforms. Rest assured, no standard airline fare is served onboard: the fine-dining menu is prepared by western chefs.

The aircraft was acquired from bankrupt Batavia Air. an Indonesian company, by a Chinese business man, Li Yang , for 35 million Yuan. The plane was partly dismantled, towed and reassembled on-site.

The bonus? There is actually a flight simulator in the cockpit, for those who are willing to fork out the extra cash.


For more photos, check out these news pieces:
Now that’s going to cause some serious traffic jams! A passenger PLANE appears in the middle of busy road in China - Daily Mail
First look inside China’s £4 million fine-dining restaurant converted from a retired Boeing 737 - Jet Line Marvel
This Restaurant Is Inside a Boeing 737 - Food and Wine
LOOK: Restaurant opens inside a Boeing 737 in downtown Wuhan - Shanghaist
Photos: China Unveils Its First Restaurant Inside an Airplane - China Aviation Daily
Airplane restaurant opens in Wuhan - China Daily


Related resources
Review: The Airplane Restaurant, Colorado Springs - One Mile at a Time
The Burning Man 747 - IHateTaxis Blog
Awe-inspiring homes and buildings made out of old airplanes - Gizmodo
Top 10 Ways To Recycle Airplanes - The Very Best Top 10
10 Odd Uses for Airplanes - Wacky Archives
Fine Dining In a Converted DC-10. Plus - Ask The Pilot


More from IHateTaxis
What I learned from my taxi driver
Brexit and the impact on travel - Travel bloggers
Mugging: are you a target?
Famous Fare: Nimoy Drives JFK
Spot the deadly fake taxi on your international travels!