The best and worst cities to take a taxi

How safe is it to take a taxi in Namibia? How worthwhile is a minimum fare in Tokyo? Why is Bogota, Colombia the worst city to take a taxi?

If in Colombia there is suspicion of this public service, it is worth considering what other countries stand out for unreasonable charges and, likewise, what cities - despite high prices - provide safety, security and comfort.

Kienyke consulted Todd Romaine, marketing manager for the website IHateTaxis.com, which specializes in offering ground transportation guides for airports, terminals and tourist attractions around the world. The company stresses that it is difficult to generalize about a country, as there are a range of fares, experiences and perceptions that tend to be concentrated in the large cities.

The best countries and cities to take a taxi

The IHateTaxis.com website was created by two Canadian brothers who were scammed by a taxi driver, and decided to face a common problem. Romaine stresses that Canada, the United States, New Zealand, Australia, Japan and much of western Europe have the best taxi service.

Here we take into account several factors, such as distance from the city centre to the airport, taxi availability, surcharges and gratuities, among others.

"Although several countries have high rates, and while taxi drivers hate short trips and controls in the pricing system, 70% of the people who consult our website are satisfied with the service of these countries in general," said Romaine.

It took into account five categories: knowledge of the area, cleanliness, safety and security, ride quality and friendliness. London, New York, Tokyo and Shanghai were chosen as the best cities for taxi services by more than 1,600 respondents. 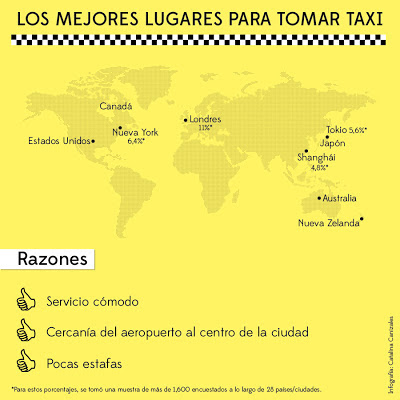 The worst cities to take a taxi

IHateTaxis.com has identified six cities where tourists perceive they are most exposed to taxi scams, such fake surcharges, unwarranted stops, altered taximeters or broken meters.

Bogota is the worst by issues of security, according to 15,777 negative reports by users who complain of constant theft or violent crimes (such as the famous 'Millionaire Walk').


Here's how the "Paseo Millonario" (Millionaire Ride or Express Kidnap) works: Once you are in the taxi, the driver will stop and pick up accomplices (sometimes taking a detour to do so) and together they rob you. But they do not stop there. They will demand that you withdraw cash from your debit card and credit card at ATMs, and they will drive you around until your withdrawal limit is reached. (source: IHateTaxis)


Stockholm, Sweden is unregulated and, according to IHateTaxis.com, drivers have exaggerated rates.

Although the service is convenient, 1,500 respondents have reported earning to IHateTaxis.com that in Bangkok, Thailand many rate-related scams occur. A similar case is presented in Cairo, Egypt and Rome, Italy.

"It is also noteworthy that in India, China and most of Africa the general chaos that occurs as a result of traffic, unsafe areas, and constant haggling, represent a major threat to users". 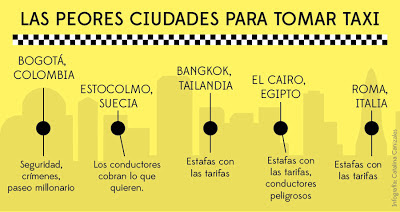 The most expensive fares

The worst news for a company is when one of its employees returns from Tokyo with a taxi bill for travel expenses. The receipt can reach €300 average, with can be a surprise to superiors.

As a tip, a ticket on the Narita Express train (€28) will be 150% cheaper to travel from the airport to the city centre by taxi.

"The results differ if we look at the cost per mile versus the overall fare. While the ranking of most industry articles is measured by the cost per mile  … what matters to travellers is the total cost, from the airport to the city centre", said Romaine of IHateTaxis.com. 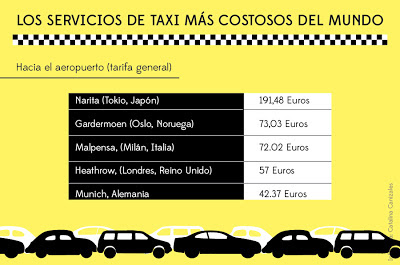 The cities with the cheapest taxi fares

The basic cost for a city centre - airport varies between a price of just over a half euro and the three euros. With the following table you can find the cheapest rates to travel by taxi. 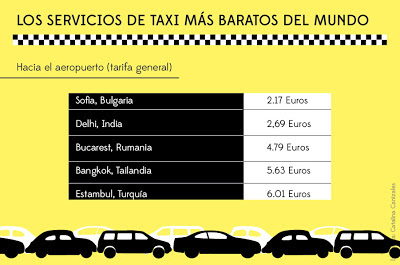 Luxury brands, classic and other models used by taxi drivers

Manganese Bronze Holdings plc is a company specializing in the manufacture of the famous London black taxis. Although it has more than 68 years of experience in the design of the historical models, excessive debt forced its owners to sell the company.

There are three types of available fares for travel in these taxis, which depend on the days and hours when the journeys are made. A journey of 40 minutes can go for about €60 euros.
﻿
The Ford Crown Victoria Taxi is perhaps one of the most recognized brands in the world. While on the streets of the New York City there remain more than 13,000 vehicles in this category, 2011 was the last model year built. If you arrive at John F. Kennedy International Airport and your destination is Manhattan, it will take approximately $52, plus tips, for a taxi ride. ﻿﻿
﻿
Although it may seem exuberant, in Moscow the companies decided to bet on the comfort of its customers with luxury transportation. Only on the streets of the Russian capital can you find a Maybach 62 red. The price of a run from the airport to the city centre can cost €40, relatively high value if you consider that the trip is made in a vehicle that is worth about €300,000. ﻿﻿
﻿

Note that the above is an English translation of the Spanish original.
Posted by IHateTaxis at 11:28 2 comments