The fate of Berlin's Tegel Airport 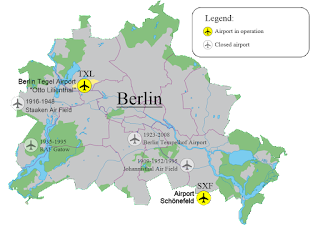 The power of the petition could turn the tide at Berlin's Tegel Airport.

More than 200,000 Berlin residents have signed a petition to demand a referendum on keeping the city's Tegel airport operating after the German capital's new airport opens. Tegel... was meant to close once a much-delayed new airport opened southeast of Berlin. But critics say the new airport will be too small to meet passenger demand even when it opens, possibly in 2018.
Tegel, in the northwest, and Berlin's other airport, Schoenefeld in the southeast, served 33 million passengers last year. The capacity of the new Brandenberg Airport, whose opening has been pushed back from January 2017, will be 27 million... [read the full story].