Getting to/from Sochi Airport... with a little luck ♣


Welcome to Сочи (Sochi). We are trying to help you get to and from Sochi Airport, but we're hoping for a little luck.

Luck, because information is more scarce than we would expect for an airport paying such a central role in a major world event. Case in point: the Sochi Olympic Games open in less than a month, and if you search for "Sochi airport official", this is what you get: 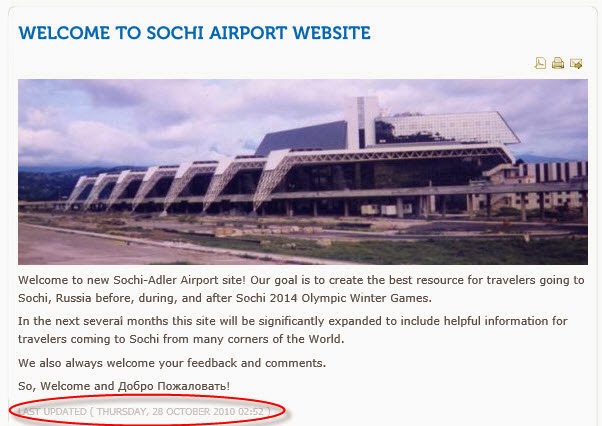 Oh dear. While we appreciate that the Games' Russian hosts may not hold communications to the same standard as the West, we surely expected a higher requirement from the IOC. Well, perhaps they have bigger fish to fry at the moment.

That makes our job even more important than ever, in making our Sochi Airport (AER) Transportation Guide as complete as possible. The only problem is, that source information truly is lacking. We have been scouring the web, but we aren't finding much, or we're finding conflicting information. But we are putting the best information here:

We are eager to have our guide as complete as possible, to help as many people as we can, but we're in the dark here. If you have seen, or you have, more or different information on ground transportation at Sochi Airport, including special alternate arrangements during the Games, please add your comments below.

Please leave your Sochi Airport transportation tips in the comments below!

On the subject of luck, perhaps it is only fitting that we are calling on luck to help us out here, as Sochi is considered to be a very ♣ lucky ♣ place:


The most famous Russian saying about the city is "If I could read the cards, I would live in Sochi" ("Знал бы прикуп - жил бы в Сочи"). Initially coming from the Preference card game, this saying shows the association of Sochi and its inhabitants with luck, moreover, with an accidental and unpredictable fortune.


To help you with your luck in getting to and around Sochi, we've listed some additional links below, but here's our favourite:
﻿

Posted by IHateTaxis at 15:47 1 comments